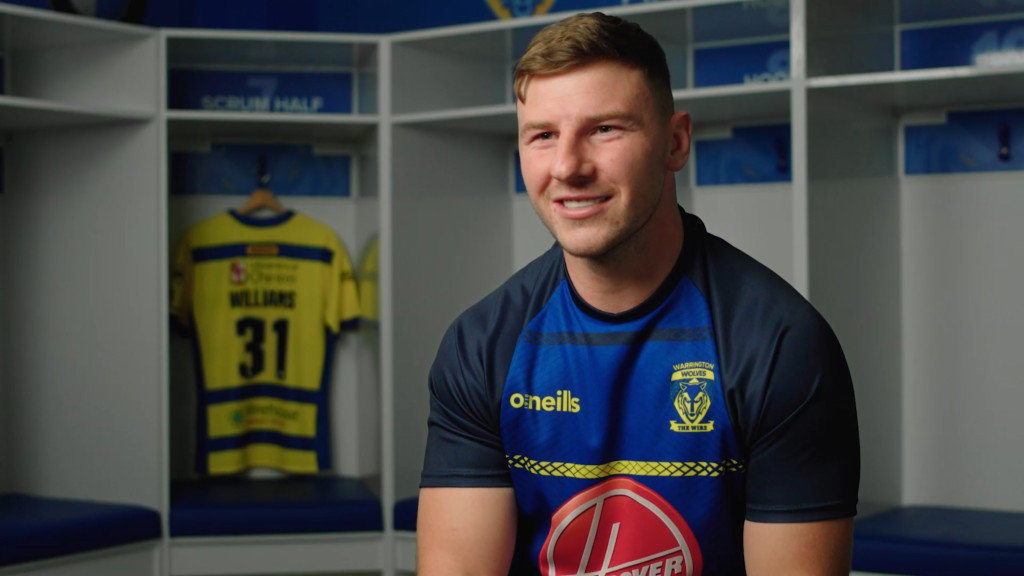 I have been working with the Warrington Wolves marketing team as a videographer since the beginning of the 2016 season. The filming projects are varied, which is fantastic as it helps to keep work interesting. I shoot training sessions and interviews, but in the main I film match days and edit promotional content for ticket sales.

The purpose of the matchday content is to showcase the experience from the fans’ point of view. Up until recently, these films were edited down to two minutes, like short music videos – action packed, fast cuts and set to tunes from Artlist. However, more recently we have been producing much longer form content, like a one man band version of BT Sport’s ‘No Filter’. Aside from the length of the videos, the most noticeable difference with our ‘Access All Areas’ series, is the audio. Instead of hearing bouncy royalty free music, we’re listening to fans, atmosphere, and live commentary to create a very different viewing experience.

Bitesize video content is undeniably powerful in the fast paced world that we live in today. However, well-produced long form content can be more immersive and keep the fans engaged for much longer. And we’ve had some great successes working this way. We mix in the broadcast footage captured from Sky, so the fans are able to see all the key highlights along with the ‘behind the scenes’ content. It enables me to focus more on the fans reactions, or coaches in the dugout, instead of the action on the field. Attempting to do so as a one man production is a near impossible task. Another benefit is that it provides powerful imagery that we can reuse at a later date for promotional material.

My main camera is the Sony FS5. When I purchased it in mid 2018, it wasn’t a difficult decision. At the time I was looking to upgrade my trusty Canon C100 with something more contemporary that had 4k and super slow motion capabilities, whist still having ND filters and XLR inputs. It wasn’t just the camera’s specifications, but the ergonomics too that were important to me. When stripped down to it’s basic form, the Sony FS5 is light weight, and features such as the rotating hand grip and variable ND filter really sold it to me.

The variable ND enables you to seamlessly change exposure whilst avoiding the jump in exposure, caused by changing ISO. Even now, there aren’t many cameras around with this feature. The rotating hand grip can be adjusted quickly to help shoot high or low-angle footage. It really comes into it’s own when trying to capture the action in a variety of ways. Prior to the Sony FS5, this was awkward to accomplish and perhaps I wouldn’t bother going to the trouble. That’s why ergonomics are crucial, and I think more important than a camera’s specifications.

Having a camera which shoots super slow motion (up to 200fps in 1080p) is priceless for capturing sport. Not only does it add tonnes of production value, it helps to emphasize key moments or small details that may go amiss in normal speed. It certainly opens up new filmmaking possibilities.

In terms of picture profiles, I film in S-Log 2 most of the time. I used to shoot a lot in Cine 2 or Cine 4, which are good profiles that capture a great amount of dynamic range, without the need to colour grade. It’s ideal for when you need a fast turnaround. However, once I purchased a SmallHD monitor I could confidently expose and reap the benefits of S-Log2 and the Sony FS5’s 14 stops of dynamic range. (Can you believe you can’t view a waveform on the FS5? Come on, Sony!)

I’ve debated purchasing the RAW firmware upgrade and a Shinobi Inferno for a while. Despite the benefits of recording in RAW (or more realistically Prores), the biggest issue I have in justifying the cost is the ergonomics. I love the size and weight of the FS5 – it feels a very intimate camera to work and almost play with. Adding all that weight kind of defeats the purpose. You also lose some in camera processing benefits, such as noise reduction and correction of lens distortion. Now these can be corrected in post but it all takes time and lots of processing power from you PC/Mac.

If Atomos release a 5 inch monitor capable of handling the RAW signal, I’d be much more willing to upgrade. Until then, I’ll keep on enjoying my stripped down FS5, I’m sure it’ll serve me well for another couple of years.

Warrington band Filthy Tricks starring in the 2020 Season Launch Promotional film. The video is regularly used pre match to help build atmosphere prior to kick off.

Since lockdown began, work as a videographer has been different, of course. Although I have been editing content from my home office – no change there – there has been no Rugby League to film. However, it has presented an opportunity to push out a lot of archive content, which we have done so in the form of Rewired. Rewired is a series which looks back on famous victories from yesteryear, coupled with the voices of the heroes involved. The interviews and audio have been captured via Zoom and therefore the quality is somewhat dreadful. However, content is king and the analytics show we’ve had great success. Thousands of Warrignton Wolves fans have been reminiscing with players past and present on a Sunday evening via Facebook Live.

We’re now looking to repackage the content and launch a Warrington Wolves podcast channel. The first few episodes are pretty much ready to go. So despite the adversity, there has certainly been opportunity as a videographer to pivot in our methods and engage with fans in new ways that we perhaps would never have done so otherwise.

Graham Kirk is a freelance camera operator and video editor / videographer, with a passion for sport. He’s based in Greater Manchester

By: Graham Kirk | 16th Mar 2021
Warrington Wolves - Man Behind The Camera Video Production Hints and Tips - Career Advice for Students
We use cookies on our website to improve the customer experience. Your cookie settings can be changed at any time through your browser settings. I understand